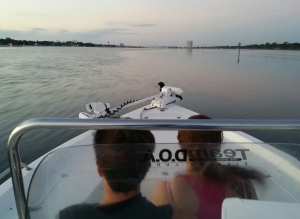 Spent most of the morning catching and not fishing with new clients Kassie and Kainen who are down here visiting from Louisiana.  I was a little leary about the full moon conditions but the fish were active as could be.  We started things off by catching Kainens largest fish to date, a big Black Drum.

It might not be huge to my or your standards but to him it was a whale!
After a few more of those and a mix bag of other fish we moved on.  The next spot we hit was Mangrove Snapper city.  Most of the fish were on the smaller side 8-10″ with a few 11″ in the mix.  They were enjoying the hard hits that mangos are known for so they played with them for a while.  Next was a structure bar I like to fish this time of year that usually holds some decent trout.  The trout were there but nothing huge.  They reeled in a handful of solid 16-18″ fish. 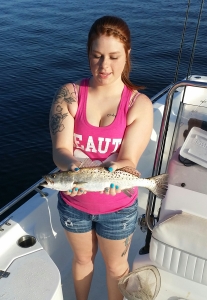 and we decided to make one last stop.  We pulled up to a feeding frenzy along the bank.  Medium sized Snook were blasting the tiny bait fish that have invaded the area in the past week or so.  I believe they are baby manhaden.  We threw everything we had at them but they were dialed in to those 1/2″ fish.  Oh well, it was fun to watch.
Capt Eric Greenstein
http://www.FullScaleCharters.com
3864499043